A WELCOME RETURN TO ACTIVE SERVICE 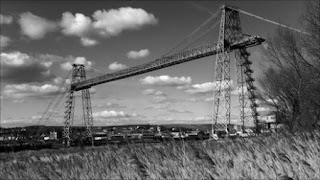 Many people in and around Newport and across Gwent, will welcome the Transporter bridge's return to active service transporting people (and vehicles) across the muddy Usk. I am particularly pleased to see that Newport (and Gwent's) iconic Transporter Bridge is now up and running after its refit. The refit was part funded by the National Assembly Government with £800,000, Newport City Council put in £350,000 from the council and Cadw some £75,000.

The Transporter bridge which dominates the skyline to the south of the city is quite unique, why it does not have World Heritage Status I don't know. The bridge has real potential to draw in visitors, certainly, when on weekend breaks from living and working in London, I brought my a number of my Australian, Kiwi and South African friends to have a look at the Transporter bridge, and to cross back and forth the broad and muddy Usk.

As a small child I never quite had enough Meccano or Lego to make a whole one, usually ending up with merely one of the bridge pillars, although it never stopped repeated construction attempts on my part. Crossing the bridge as a child was a regular treat, but the bridge's working life saw it being used by thousands of Newportonians going to and from work and to and from Somerton park the then home of Newport County. I was as small child (and still am as an adult) fascinated by the way the Transporter Bridge works.