The impact of the ConDem government's planned increase in VAT will be a crushing blow to the Welsh NHS. That was the message today form Plaid Cymru’s health spokesperson Helen Mary Jones AM. Ms Jones has obtained figures from health boards across Wales which estimate that the impact of the VAT increase on revenue allocations will be at least £13.2m, while the impact on the current NHS capital programme would be £7.7m in a full year.

It is worth remembering that back in June the Conservative-Lib Dem Westminster government announced that VAT would rise from 17.5% to 20% on 1st January 2011. Plaid’s Helen Mary Jones, who is the AM for Llanelli, warned that increasing VAT will put a strain on public services, like those provided by the NHS, at a time when they need to make best use of every penny that they can get.

This comes on the back of savage cuts that have already been imposed by the ConDem government on the communities of Wales. The VAT increase is yet another hammer blow to our public services. The Plaid driven government is working hard to protect the people of Wales from the ConDem axe and has secured a level of budget protection for community and secondary health care. Sadly the Welsh government has no powers to stop this VAT attack on our health service.

That £20m is a significant chunk of health board and trust budgets and is really only part of the story. The actual cost of the VAT increase to the NHS in Wales will be even higher. The ConDem government has taken an axe to our public services already, it's absolutely ridiculous for even more money to be clawed away from our public services only to end up in the treasury's coffers. This increase in VAT will put a huge strain on health, and other public services, at a time when they need to make best use of their resources.

Any Tory claims about protecting health are a sick joke, the reality is that the conservative/Lib Dem government's policies are going to have a damaging direct impact on our National Health Service in Wales. Plaid Cymru is committed to a Welsh NHS that is free at the point of delivery.

Plaid's actions in government are proof of this, what with putting a stop to the previous government's disastrous hospital closure programme and ruling out the use of PFI in the NHS. The Conservatives and their Liberal Democrat little helpers in Westminster need to think about what they are doing and put a stop to this blatant attack on our public services in Wales. 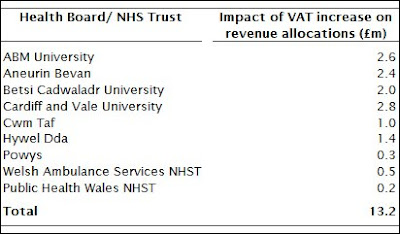 This table details the estimated full year impact on revenue budgets for each Health Board and Public Health Wales NHS Trust arising from the VAT increase from 17.5% to 20% announced in the UK Budget on 22nd June. Estimates were not provided by Velindre NHS Trust. It is estimated that the impact of the increase on the current NHS capital programme would be £7.5 million in a full year. This information is not available by Health Board.
Posted by Jonathan T Clark at Thursday, December 09, 2010