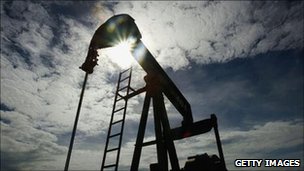 Last week the price of oil fell after the International Energy Agency announced that its members would sell some of their reserves on the world market.The International Energy Agency (IEA) stated that the move was in response to the disruption in supplies caused by the Libyan conflict. The plan envisaged a release of an extra 60 million barrels of oil on to the world market.

The US government announced that 30m barrels, half of the total, would be released from its Strategic Petroleum Reserve. The UK planned to contribute three million barrels.The release has been designed to reduce the price of oil further in order to protect the economy.Oil Industry analysts have warned that there is a risk the IEA's latest move may hurt relations with major oil exporters i.e OPEC.

In truth any short term economic effect caused by the release of oil reserves will be cancelled over the medium term by a combination of increased demand and the effects of falling production. IEA members are required to hold sufficient stocks of oil to last 90 days without any imports (currently the IEA says its members are holding enough for 146 days or 4.1 billion barrels). IEA members have agreed to make two million barrels of this available every day for 30 days in an effort to increase the amount of oil on the market and therefore reduce the price.

The IEA also says that it will review the market again in 30 days time. The Saudi's incidentally have come out and said that they would be increasing production to meet demand - it will be interesting to see if this actually happens considering the potentially perilous state of production form the Ghawar and Safanyia oilfields. Either way no doubt OPEC will reduce production to maximise their profits and mitigate the IEA's decision.

just for the record as we begin to face the effects of peak oil, it is worth noting that oil consumption in Canada and the United states has grown by 20% since 1980 and is up 63% in Australia and 74% in New Zealand, obviously the Chinese are also using more oil than previously to feed their growing economy. Prior to 2008 the IEA itself said that production form the world's oil wells are is declining at a rate of 3.7% per year. After 2008 the IEA vigorous revision of it's figures and stated this rate of decline actually stands at 6.7%.

Why does the phrase fiddling whilst Rome burns come to mind...
Posted by Jonathan T Clark at Sunday, June 26, 2011