WAITING FOR THE GLIMMER MAN...

Yesterday we were waiting with no particular degree of anticipation for Chancellor George Osborne to inform MPs (and the rest of us) that there was no "no miracle cure" to the UK's economic woes in his Autumn Statement. The Chancellor made his statement against a pretty grim economic background when compared with his budget forecast made last March in the Budget. Mr Osborne continued to state that the coalition was continuing to "confront the country's problems" and was hard at work reducing the deficit.

The cancellation of the proposed 3 pence a litre increase in fuel duty may help a little and the  extra £227 million pounds for capital projects is useful it does little to redress fair funding for Wales. When it comes to growth being predicted to be -0.1% in 2012, down from the 0.8% prediction in the Budget in March we are truly in the realm of old style Soviet economic statistics. I suspect that some of the Con Dems (the Cons rather than the Dems I suspect) actually believe that austerity is the answer to the economic disaster left behind by Gordon Brown (and New Labour).

The party formerly known as New Labour predictably called the government's economic policy "a terrible failure” not that they would have done anything different if Gordon had managed to pull the electoral fat out of the fire back in 2010. What’s pretty clear from all of this is that the Con Dems are out of ideas, there was not really a Plan A, so there is little likelihood of a Plan B and clearly no desire to sort out the ongoing UK’s problem with tax evasion. So much for being all in it together.

Almost unnoticed by the UK’s self Anglo centric media the Irish Government presented its sixth austerity budget since the banking and economic collapse. Tax rises and spending cuts were announced as the government aims to save another 3.5 billion euro (around £2.8 billion). All of the so called economic "low-hanging fruit" has been picked clean after four harsh years of austerity. A new property tax (set at 0.18% of the value of a home up to 1 million euros (£800,000 pounds or $1.3 million dollars) and cuts to the health and social welfare budgets are planned.

Since 2010, Ireland, following an international bailout, has been forced to follow strict spending limits set by the EU and International Monetary Fund. The Irish government stated that it would meet its deficit reduction target for 2012 and that it  projected a budget deficit of 8.2%, compared with a target of 8.6%. Therefore the deficit would continue to fall steadily to 2.9% by 2015, it added. Irish economic forecasts (unlike on this side of the Irish Sea) were based on economic growth of 1.5% in 2013, rising to 2.9% growth by 2015. 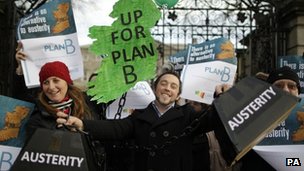 Ireland is no Greece and while it has been riot it has not been protest free. The evident anger (if not quiet rage) at the bankers and the elites abject criminality and sheer folly may have been sidelined at the prospect, after hard years, by some light at the end of Ireland's dark economic tunnel, but, I suspect that it won’t be forgotten. Despite some economic glimmers  there are still plenty of people across the Celtic Sea who are less than happy with the choices made by the Irish elite and the fact that they have largely got away without punishment for their crimes, misdemeanour's and bad decisions. 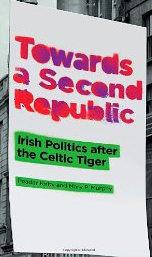 There have been calls for a new republic and a fresh start literally writing off the past (and the debt) in a simular manner to Iceland. in ‘Towards a Second Republic’, Peadar Kirby and Mary Murphy exposed the winners and losers from the current Irish model of development and related the distributional outcomes of the use of power by Irish elites. It’s analysis of Ireland's economics, politics and society, draws some important lessons from its cycles of boom and bust. They also look at the role of the EU and compare Ireland's crisis and responses to those of other states.

The book (which is well worth a read) also includes proposals to construct new and more effective institutions for the economy and society are also included. Considering (somewhat closer to home) that  there have been no real consequences (or punishments for that matter) for the banking crash for the inhabitants of the Westminster village or the bankers (save for the loss of the odd bonus), I suspect that it won't be on the Christmas reading list of any elite reasonably near here.