POWER FROM THE PEOPLE

There are times when Westminster, the Euro sceptics and perhaps the City are happy for the 22 miles of water separating the British Isles from the European mainland to seem psychologically much wider than they are geographically. Economically at times, particularly when it comes to the model for energy production, distribution and ownership those few miles of water at times might as well be a thousand miles wide.

I mention this because last week Ofgen referred the energy market (this is Ofgen speak for the big 6 energy cartel members) to the Competition and Markets Authority for a full investigation. Ofgem says that the investigation should ensure, once and for all, that competition works effectively for consumers, by bearing down on prices while driving improvements in customer service and innovation.

Let’s just say that I for one won’t be holding my breath... as our energy production and distribution model has been restructured (over the years) to primarily benefit the big 6 energy cartel members, their interests and their (City) profits. From the perspective of energy consumers and smaller scale energy producers, the problem is that all the Westminster based political parties had quietly bought into this cartel dominated model of energy production and ownership.

The reality is that the UK’s cartel dominated model for energy production and distribution is not necessarily the norm everywhere in Europe. Alternatives exist and prosper, a particularly good example of a balanced and healthy energy mix can be found in Germany. Here small may very well be beautiful, particularly in relation to energy, back in 2012 some 22% of the countries energy came from small scale green entrepreneurs.

Community co-operatives (both urban and rural), farmers and homeowners are part of the 1.3 million renewable energy producers and part of the energy mix. Incidentally in Germany, citizens’, cooperatives, and communities own more than half of German renewable capacity. Small scale electricity generation is having a knock on effect encouraging change throughout the energy system. 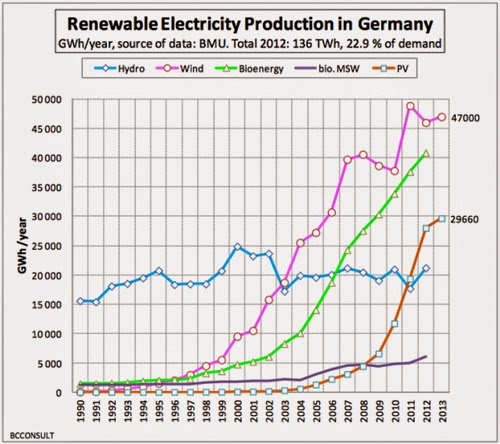 In Berlin, a cooperative (Burger Energie Berlin – literally Berlin Citizens Energy) is campaigning to take control of the capital's electricity grid with some 35,000 km of underground cables. The cooperative is a free, cross-party coalition of citizens who are committed to a sustainable, sustainable and democratic energy policy in Berlin. Members have one vote regardless of the amount their deposit and anyone who wants the power network to be in civil hand, is welcome.

Ordinary Berliners have invested their cash in the venture with the intention of producing a reliable 100 percent renewable energy supply. The aim is to promote the integration of renewable energy into the grid and to invest a portion of the profits from this directly into the transition to renewable energy. At present the Berlin electricity grid is run by Vattenfall (whose concession runs out this year) regularly generates millions in profits, members of the co-operative believe that the profits from the grid operation should flow to Berlin’s citizens.

This is grass roots energy generation that has potentially the power to change the nature of the energy supply system (in Germany and elsewhere). They aim to build an energy grid that is better handle the rise of green power and allows local use of locally produced energy. This may well be a case of small being both beautiful and perhaps more disturbing from the perspective of Westminster being both community beneficial and community owned.


These developments are a million miles away from the alleged ‘Free market’ for energy that exists in the UK, which is dominated by the ‘Big 6’ energy cartel members. The way the current set up works, it is difficult to imagine ‘Government’ at most levels in the UK grasping  the concept, let alone the practicalities and possibilities of genuine community owned and community beneficial energy generation projects even crossing the collective mind of Westminster and some of the devolved institutions.
Posted by Jonathan T Clark at Monday, June 30, 2014