A test of a full-scale tidal power generator in Ramsay Sound, in Pembrokeshire will show the potential for renewable energy has been unveiled. The underwater turbine in Ramsey Sound will run for a 12-month trial, powering homes in St Davids. The test turbine constructed by Cardiff-based developers Tidal Energy Ltd, the 150-tonne demonstration device with a frame as high as a seven storey building has been built in Pembroke Dock by Mustang Marine, recently saved from administration. The turbine will generate energy from tidal currents on the sea bed. Tidal Energy Ltd claims the patented DeltaStream device will be Wales' first grid-connected freestanding tidal turbine, and will help to make the case for a larger scheme involving nine turbines. 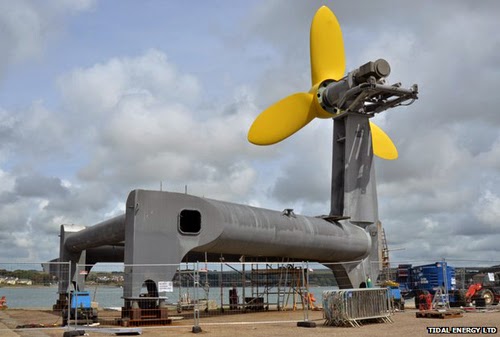 Energy generated by the 400kW demonstration device, which will be installed within a matter of weeks will be fed into the National Grid and be used to power nearby homes. The turbine, located in a Marine Special Area of Conservation, includes design features aimed at minimising the impact on the environment.  The project has been supported by £8 million pounds of European Union funding, matched by majority shareholder Eco2 Ltd. The company is planning a larger 10MW scheme involving up to nine turbines off St Davids Head, which would generate enough power for 10,000 homes. Other tidal energy schemes in Wales include a £70m project off the coast of Anglesey due to open in 2016 and a £650m tidal lagoon proposed for Swansea Bay.
Posted by Jonathan T Clark at Friday, August 08, 2014