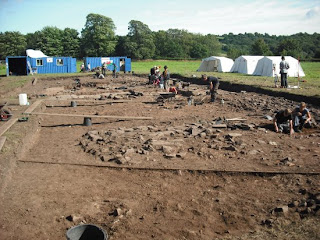 So now it's back to reality with a bump, and playing catchup. I have spent the last four days working as a volunteer (with trowel, mattock, shovel, bucket and wheelbarrow) on an archaeological dig on the Priory field, inside the Legionary Fortress at Caerleon - so no radio, no TV, no politics, etc.

So far it's been a fairly a typical August with sunshine, drizzle, humidity and gales - am pretty tired, but, it has been worth it and great fun. The dig is part of on-going excavations, which, have over the last four years, helped to identify eight previously unknown barrack blocks, three large granaries, a monumental metal workshop and a very large store building. You can keep up to date with progress via the excavation blog.

Final excavations are taking place this year, and last up until mid September, inside the Roman fortress involving staff and students from University College London (UCL) and Cardiff University. The dig is open to the public and there are guided tours of the excavation site, at 11am and 2.30pm daily, except for Monday's.

Back to reality, have I missed anything whilst i have been away...?