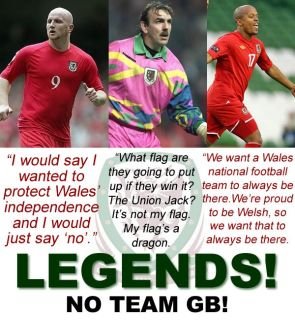 The Western Mail (Saturday 10th March) carried an article about the selection for the Team GB football team for the 2012 London Olympics. They tried to pas sit off as some sort of debate over whether players from Celtic nations should be involved. Andrew RT Davies, Welsh Conservative leader at the National Assembly, proved that he clearly does not get it or chooses not too. While Plaid AM for South Wales West, Bethan Jenkins got it spot on.

The continued existence of an independent Welsh international football team, especially through the temporary emergence of a Team GB football team, is non negotiable. The UK Government simply does not get it and is probably incapable of getting it. Why would an English sports minister have the slightest concern about the future of the Welsh national football team? FIFA's word is clearly not good enough, the organisation is tainted with a long and recent history of corruption and some very questionable financial dealings.

Our Football Association of Wales is one of the world's oldest football associations and is an important symbol of our nation.The game in Wales is undergoing a renaissance at the moment and Welsh footballers and Welsh teams have a higher profile than for a while domestically and internationally - this should not be threatened under any circumstances. The football associations of Northern Ireland, Scotland and Wales have pretty clearly stated (on more than a few occasions) that they are not interested in a Team GB football Team, which bit of NO don't the London Olympic Organisers understand?
Posted by Jonathan T Clark at Saturday, March 10, 2012