As a historian / archaeologist and someone who has more than a passing interest in politics I have to find a happy medium between living in the past and living in the now. It is important that we remember what has been done (for good and for bad) and to use that knowledge to make intelligent sensible choices about our future. I am a big believer in ‘rememberance’, by that I mean we should never be selective when it comes to remembering history.

If you want to wallow in nostalgia about the ‘British Empire’ or the ‘Soviet Union’ that’s fine, but, while remembering the heroic and principled stand against fascism in 1940 then you should also chose not to forget about the Bengal famine (which killed six million) in the middle of the second world war or the million or so who starved to death in Ireland in the middle of the 19th century. 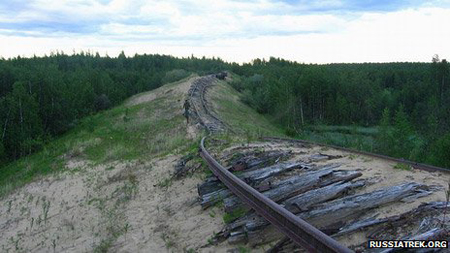 The remnants of Stalin's Artic Railway
For those who yearn for the strong man in Russian politics and days when the sound of ‘Soviet rockets made the world tremble’ don’t forget the millions who were murdered or imprisoned by Stalin and his cronies (not to mention the millions killed and imprisoned by the fascist regimes in Europe and Asia in the 1930’s and the 1940’s) and the repressive regimes that held sway across half of our continent until the early 1990’s.

The vast majority of the old brutal oppressive Communist dictatorships, save for Cuba and the People's Republic of China (PRC) have collapsed and been rightly cast into the dustbin of history. While both Cuba and the PRC have made real social achievements (particularly when it comes to health care and literacy) it is important to remember that these achievements have come at one hell of a price in broken Human lives and scattered bones.

In recent years the tide may well have finally turned against dictatorship, even though we may yet have some way to go before they are finally gone. Certainly the real courage shown by protesters against tyrannical (nominally Communist and other) regimes, particularly in the last 12 months has been impressive, it has however been matched by what can best be described as a failure of leadership on the part of the UN Security Council which appears tired, out of step and unfit for purpose.
Posted by Jonathan T Clark at Thursday, June 07, 2012