THE CONSEQUENCES OF ANNIVERSARIES...

Quietly and almost unnoticed a grim anniversary (the 23rd August) was commemorated last week in some parts of Europe. Some 73 years ago on the 23rd August 1939, the Molotov-Ribbentrop pact was signed between Nazi Germany (under Hitler) and the Soviet Union (under Stalin) something that changed Europe forever. The pact concluded between these brutal totalitarian regimes was a key trigger moment for the European part of the most brutal war yet known. Millions were killed during World War II and many more suffered under totalitarian regimes for decades after the war ended and our continent was brutal divvied between the West and the East.

The 23rd August is now a Europe wide day of remembrance for the victims of all totalitarian and authoritarian regimes. Back in 2009 the Parliamentary Assembly of the Organisation for Security and Cooperation in Europe (OSCE), a fifty-six-nation body, which includes the United States and Russia, passed a resolution naming the 23rd August as commemoration day. This date was not chosen by chance: it just happened to be the seventieth anniversary (in 2009) of a Non-Aggression Treaty signed between the Soviet Union and the Third Reich. Stalin and Hitler divided Poland and carved Europe into spheres of influence, the Second World War (in Europe) began a few days later.

At the time the Russian representatives went predictably ballistic, their delegation called the resolution "a public insult against all Russians." It was insensitively placed Nazism and Stalinism on a par and “forgot that it was the Stalin-era Soviet Union that made the biggest sacrifices and the biggest contribution to liberating Europe from fascism." Back home in Moscow the rhetoric was even hotter as the Russian Duma's international affairs committee in Moscow, stated that the OSCE motion was little more than an attempt to “rewrite the history of World War II by placing responsibility for its causes, course and results equally on Hitler's Germany and the former Soviet Union."

Prior to the establishment of the commemoration day all the sins of the Soviet Union and its many victims have been largely and effectively attributed to Stalin. The fascist atrocities were partially judged at the Nuremberg War Crimes trials, but, in the East, after the demise of the Soviet Union there was no Soviet Nuremberg and many of those who committed atrocities entirely escaped punishment.

At some point there is a need to face up to the grim truth about Communist rule in Russia? And neither should we forget that post 1945 Communists Satellite regimes in Eastern Europe regularly trampled civil and human rights under foot.

Back in 2009 the Russians rapidly objected to the OSCE's resolution, as the Russian Government was not ready to mention the Kremlin's crimes committed over generations against their own people. There were plenty of Soviet victims of the "Stalinist terror" - between 1930 and 1941 some 20 million Soviets were "convicted" and suffered arrest, execution, or detention. The old USSR census for 1939 counted 37,500,000 families, and four million single adults. In the 1930s the terror affected around one or more members of every other family. The terror killed more than two million Soviet citizens in that decade, above and beyond the several millions who died in the man-made famine in Ukraine. Pre 1941 something like between 90 and 95 percent of all Stalin's victims lived in the former Soviet Union and post 1945 the terror was exported to Eastern Europe.

As yet there has still been no official Russian State commemoration of Stalin’s victims and no single trial of any of the perpetrators has ever been held. The only significant museum of the vast Gulag concentration camp system is Perm-31 which is located in the distant Urals (out of sight and out of mind). The Russian government plays down Stalin's crimes and talks up his "positive accomplishments." Yet The Russian state may well be a long way away from recognising the victims of official state policy between 1917 and 1991, but it continues to find that it is not be so easy to bury the past. 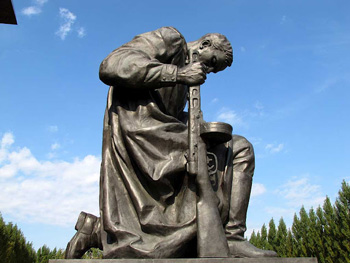 Russia, regularly notes that we in the West, tend not to recognise the important if not crucial role the Soviet Union played in stopping Hitler. Some 25.5 million Soviet citizens, over ten percent of the population in 1939, died in the Second World War. Over half of those were civilians. While Stalin signed the pact that began the Second World War in Europe, the peoples of the Soviet Union had no part in the decision. The peoples of the Soviet Union, faced by a murderous Nazi onslaught in 1941 had little choice but to rally around the Soviet State to survive regardless of Stalin and his murderous minions.

Without Soviet resistance to the Nazi’s as Winston Churchill recognised then Hitler could have won the war. We should remember the Red Army and the peoples of the Soviet Union’s sacrifices, as they saved all of us from a particularly grim fate. Russia should be proud of what was done in the Second World War and we should heap praise upon them for it. Yet the Russian Government is entirely wrong to defend Stalin and ignore his crimes inside (and outside) the old Soviet Union. It’s time to face up to the past and not wish for it to go away, and part of that process is a recognition of the Nazi-Soviet pact, its grim consequences and the harsh realities of Stalin’s rule.
Posted by Jonathan T Clark at Friday, August 31, 2012