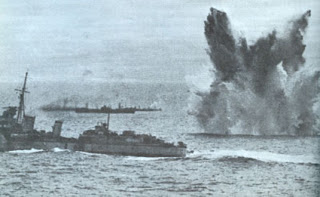 Surviving veterans of the Arctic convoys (and the much snubbed Bomber Command) have finally been recognised for their bravery and service with a new medal and award. The MoD has agreed on a design for the new Arctic Star medal and Bomber Command clasp. Honours will be sent out to veterans and their families as early as next month with surviving veterans and widows will be the first to receive the honours.

The families of deceased veterans who served will also be able to apply for the award. Over 3,000 men died in the freezing waters of the Arctic as they worked to keep supplies flowing through German blockades to Britain's ally, the Soviet Union, in Operation Dervish. The death toll of those serving in Bomber Command’s death rate was even higher with 55,000 airmen losing their lives.

Sixty years on the veterans bravery is being recognised with the Arctic Star medal for those who sailed on the convoys and the Bomber Command clasp for those who flew at least one operational mission over Germany and France.  An announcement is expected to be made in a written statement by Defence minister Mark Francois on Tuesday morning next week.

One reason why the Westminster Government has finally decided to act is that Russia wanted to present its own Ushakov Medal to Britons who had served on the convoys, but this move was blocked by the UK Foreign Office (FCO). The Westminster government rules on foreign awards meant permission could not be granted if veterans had received or were expected to receive a UK medal for the same services.

Cameron accepted the recommendations of a review of military medals carried out by former diplomat Sir John Holmes following a long campaign by veterans, their families and supporters. The Arctic convoys to the Soviet ports of Murmansk and Archangel were described as the "worst journey in the world" by Winston Churchill.
Posted by Jonathan T Clark at Thursday, February 28, 2013