OUR POUNDS IN THEIR POCKETS...

News that British Gas profits have risen because a colder 2012 meant people used more gas won’t surprise many people, let alone British Gas customers. British Gas revealed that profits from the residential energy of £606 million pounds for 2012, up 11% from the previous year, gas consumption had been up 12%. Profits are up 16% to £312 million pounds at its residential services unit, which covers services such as repairing boilers. Centrica, British Gas’s parent company, has reported an adjusted operating profit of £2.7 billion for 2012, up 14% from 2011.

Lest we forget, this winter British Gas raised its gas and electricity prices by 6% in November 2012, as did all of the other big six energy cartel members. Ofgem (Energy regulator) provided details of the plan last week, which will also limit the number of tariffs that suppliers can offer and force them to make bills clearer. The energy cartel’s excessive winter profit taking even provoked the Prime Minister David Cameron to step in and state that he was going to force them to put customers on their cheapest tariffs.

While this was nice, but it was more about being seen to look good as the Conservative pre-election pledge for an independent inquiry into the £25 billion-a-year energy industry long subject to lengthy and repeated criticisms about accusations of profiteering on electricity and gas was quietly dropped in August 2010.  The Conservatives have moved on from October 2009 when then Tory Energy Spokesman, Greg Clark (now Financial Secretary to the Treasury) said that the "cartel" of the big 6 energy firms would be referred to the Competition Commission by an incoming Conservative Government.

An 'independent' investigation into the Energy companies refusal to pass on reductions in wholesale energy prices to customers would have been nice as would the promised 'Energy Revolution' to overhaul the energy sector billing structure and charges. Then Tory Energy Spokesperson condemned the unacceptable lag between the cost of wholesale gas prices and household energy bills - noting that customers were on average being charged some £74 pound too much for their energy per year. 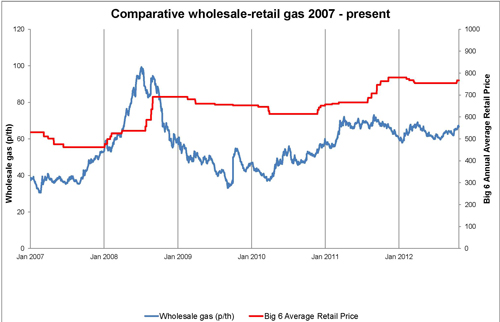 Oddly enough wholesale prices for domestic gas are currently lower than they were five years ago. At the moment it’s all about our pounds being in their pocket and maximising the cartel’s profits which coincidently boosts the Treasury’s tax revenues. Few of us this winter had as snug and toasty a relationship with the energy companies as that which exists between the political parties within the Westminster village (and without) and the energy supply companies.