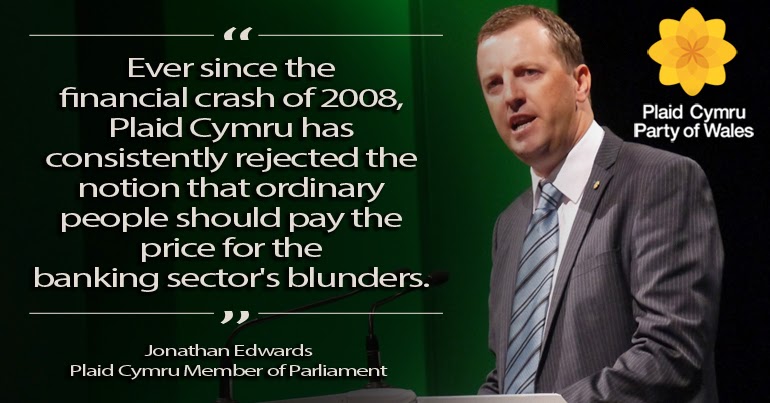 The UK's growing inequality and concentration of wealth and resources in the South East of England means that most people are not seeing any signs of economic recovery. The bad news that by election day we may be around 40% through the planned cuts something that is unlikely to bring much comfort as we (save for the happy sons of bankers) will all face the consequences of future cuts which will only lead to more suffering.

The austerity experiment has failed failure to balance the books, yet there is still time for the Chancellor to change course so that the economy can recover. The recovery has not been helped by the Labour in Wales Welsh Government's decision to effectively blow the Welsh borrowing budget on a single infrastructure project – the few miles of the M4 – at a time when every corner of Wales is crying out for infrastructure investment.

"While we welcome the devolution of business rates which the Labour Welsh Government must now use to secure a far more business-friendly environment in Wales, there is little here on offer to our nation.

"Northern Ireland is set to be offered powers over corporation tax and, as the Smith Commission recommended last week, Scotland will get powers over income tax. Wales should have the same powers without delay and Westminster needs to stop treating Wales as a second class nation.

"The current Wales Bill is now no longer fit for purpose. If we are to tackle unemployment and generate economic growth, Wales must be handed the same job-creating powers as Scotland or risk being left behind.

"Plaid Cymru is committed to a genuine Wales-wide recovery driven by well-paid, high-skilled jobs. Our policy to pledge an extra 1% of UK GDP to infrastructure investment would have delivered £800m to fund Welsh roads, railways, schools and hospitals. Sadly this was a missed opportunity for the Chancellor.

"With Labour and the Tories fully signed up to further austerity after the Election, it is clear that Wales must return as many Plaid Cymru MPs as possible after May if our nation's best interests are to be protected from the Westminster elite."
Posted by Jonathan T Clark at Wednesday, December 03, 2014