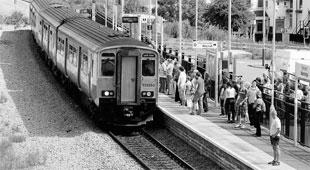 Rail fares have risen (1.1%) today; something that will directly impact on regular and occasional rail travellers, at a time when they can least afford it.

At present rail fare increases are determined with a calculation based on RPI (retail price index) – a system that has attracted repeated criticism from respected economists and rail travellers alike.

Passengers and commuters should not be hit in the pocket because the Government is intent on clinging onto a broken and outdated system.

For 2016 the rail fare rise was relatively small as a result of low inflation but at some stage inflation will return to normal, and the RPI based rail fare calculator will hit rail passengers hard as they are exposed to the substantial annual increases.

A much fairer way of calculating fares would be to use the CPI (consumer prices index) that is consistently lower than RPI. The UK Westminster Government already uses CPI to calculate its liabilities such as social security.


Plaid Cymru believes in the public ownership of railways, and the full transfer of powers over railways, including the transfer of full funding for railway infrastructure, to Wales. A Plaid Government would work to devolve Network Rail and set up a not-for-dividend company in which profits are reinvested into better services rather than used to pay dividends.

Our priority in Wales must be to deliver higher standards and lower journey times for passengers and commuters in all corners of Wales and invest profits to improve services.
Posted by Jonathan T Clark at Saturday, January 02, 2016