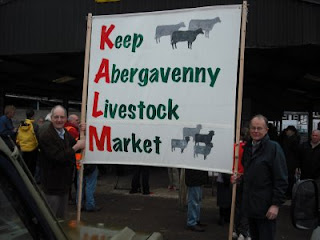 On Saturday along with some other Plaid members in Monmouth I attended and supported the Keep Abergavenny Livestock Market march and rally on Saturday 25th April 2009.
KALM aims to retain and improve the livestock market within it’s rightful place at the heart of the traditional market town that is Abergavenny.
The Cattle market is important not only to the economic well-being of the town. It's vital for the livelihood of the substantial farming community in north Gwent. Abergavenny is rightly renowned as a traditional market town. 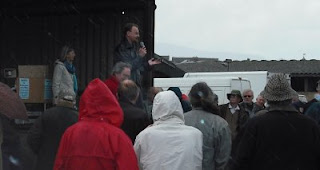 Most people can see that Abergavenny needs to retain its unique, attractive features and not join the sterile trend towards large retail and supermarket-dominated clone town centre deserts – save for Monmouthshire County Council.
In the recent past a whole range of suppliers, traders and small businesses who sell to consumers and too each other have along with whole communities suffered from this increasingly well recognised but misguided model of retailing and economic development. 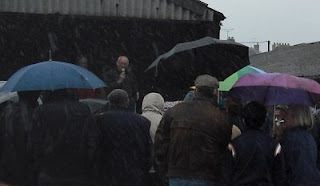 Elsewhere in Monmouthshire, the damage done to Monmouth and Chepstow by ill-thought out retail chain dominated economic redevelopment is plain to see – no one in their right mind would want to damage Abergavenny’s economy and unique character as a market town.
KALM’s strong and effective campaign, is to be welcomed, and it's supporters are to be congratulated, hopefully this should mark a turning point in the ongoing campaign to retain the Cattle Market in Abergavenny and lead to a more balanced well thought out sustainable model of economic redevelopment.
Well done to KALM and its supporters – keep up the good work.
Posted by Jonathan T Clark at Sunday, April 26, 2009