It has been said that travel broadens the mind, there may be some truth in that. You get to see new places, even if only for a few days and get to make comparisons with how things are done or function in your home country. I had a few days in Berlin (the other weekend), having caught up on sleep, have noted the following:

· The public transport system S and U Bann networks were impressive, as was the co-ordination with the cities buses – the trains and trams were very clean and provided an exceptionally efficient way of getting around, as well as running late into the Friday and Saturday evenings.

· Picked up a 3-day travel pass for Berlin, which also gave you discounted access to various museums, etc – now that is a good idea.

· Berlin – a large spread out city was seriously clean by way of comparison with South Wales, very little litter and no gum on the pavement. 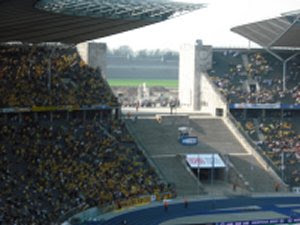 · Went to see Hertha Berlin v Borussa Dortmund (at the Olympic Stadium) - 74, 422 – no segregation (and at least 10,000+ Dortmund supporters, + lots of beer, pretzels, wurst, etc – no trouble and a relatively minimal Police presence.

· The various fans were in good spirits in the spring sunshine, lots of banter and beer drinking – on the train to the ground, I was people watching – and noticed a large Herta fan (in a small shirt) and his mates who were knocking beer back (like it was going to be made illegal at midnight) and talking to Dortmund fans, cadging lights for cigarettes, etc.

· We waited a few minutes at one S-Bann station – the large fan, checked the indicator boards for the departure time, picked up all the empties (in a plastic) bag, stepped off the train, deposited the empties in a bin and stepped back on board to start a fresh beer…(10 out of 10).

· Now I for one and sadly many others cannot imagine Cardiff City v Swansea with no segregation, beer, and a minimal Police presence…

· It is also worth noting that with the match tickets (bought on-line) you also got free travel within Berlin for an hour before the game and for 3 hours afterwards (that’s also a good idea).

· Now Hertha Berlin were well and truly horsed (losing three goals to one) by Dortmund – yet there was no trouble at all.

· The biggest cheer of the afternoon was confirmation that Bayern Munich went down by five goals to one.

· You really notice the differences when you come back home, arrived at Cardiff Wales Airport, missed the once an hour connection to the railway station, killed some time in a cafe (at the airport) before going to catch the bus. It was very expensive and dirty – a definite case of could do better! 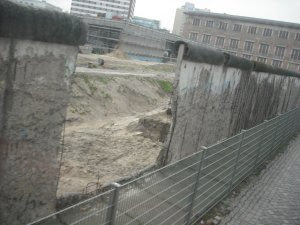 Overall think that the Germans have a much more civic minded and more functioning society and perhaps more of a sense of ownership (hence the lack of litter) – one can but ask where did we go wrong? Moreover, how can we fix it?

There were a number of small almost discreet memorials scattered about the City (along the line of the former Wall) to those who died trying to escape communist East Germany - which makes you think about how much we take for granted - especially when you remember that the last person killed trying to escape to freedom was shot by border guards in June 1989, and the wall ceased to function in November of the same year. 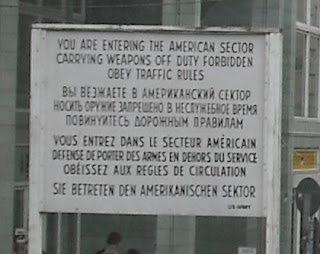 There were around some 5,000 successful escapes to West Berlin, and no doubt many failed escape attempts. There is an on-going argument about how many people died trying to escape to freedom - according to the Center for Contemporary Historical Research (ZZF) in Potsdam there were 136 confirmed deaths.

Much of Berlin remains a building site as the on-going costs of reunification as well as the East German economic and environmental legacy continue to trouble the finances of the reunified German state.