Here in Wales, we have over the years suffered from the loss of jobs overseas, as unscrupulous employers have (chasing higher profits by squeezing wages) moved their business overseas in search of cheaper labour leaving some of our more vulnerable communities up against it after years of loyal service. One thing that may change this unhappy state of affairs is the fact that as oil prices rise distance costs money.

This simple fact could have a significant impact on our country's economy as increased fuel costs will impact on company profits and indirectly provide an opportunity to revitalise our economy. Trade patterns change constantly, they will be altered by increased transportation costs, which will bite deeply into profits made by finding cheap labour in distant lands.

It is worth sparing some thought as to how we got to where we are; between 1960 and 1973 the percentage of exports as a share of world GDP rose by over 50%. This can be partially put down to to a combination of relatively cheap fuel (oil was around $14 dollars a barrel during this period) and an aggressive effort by the West to reduce trade barriers around the world.

Even factoring the effects of the 1973 oil crisis and the (with retrospect) the somewhat heated final lingering spasm of the cold war in the late 1970's/1980's there was a spectacular growth in world trade and further removal of tariff barriers between 1987 and 2002, when the average price of oil remained around $25 dollars a barrel.

It is worth noting (largely unnoticed in Europe where where we had our our problems) that the oil crisis of 1973/74 increased five fold the cost of shipping goods across the Atlantic and the Pacific and led to a 6% drop in US non fuel related imports and a corresponding growth in imports from Latin America and the Caribbean. I mention this because we have all lived with the rise in fuel prices over the last few years, there has also been a corresponding rise in shipping costs, something that will make manufacturing in distant lands increasingly uneconomic. 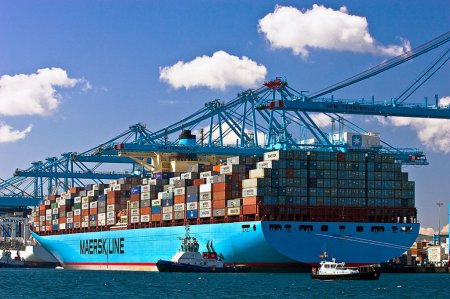 Over the last twenty years container ships have got bigger, they spend more time at sea than in port (85% in 2009 as compared with 55% some 15 years previously). The average container ship has also grown considerably larger along with the amount of goods carried by container has also grown from 35% to 75%. They have also become considerably faster something that has led to greater fuel consumption, which when combined with rising fuel prices begins to eat into profit margins of companies and organisations that relocated their manufacturing enterprises to distant lands.

Any economist will tell you that there is a direct link between transport costs and the price of the goods that we buy. The increase in oil prices between 2002 and 2009 roughly from £30 dollars a barrel to over $100 dollars a barrel increased the shipping companies costs and reduced the profits of their customers. The daily fuel bill for an average cargo ship increased from $9,500 dollars to $32,000 dollars and import costs (for the USA) rose on a standard 40 foot container travelling across the Pacific from China to the USA from $455 dollars to $1,100 dollars (between January 2007 and the end of 2008).

Despite a relative drop in fuel prices since the recession triggered by the World banking crisis we face a result of the consequences of peak oil in the near future a radical change in the way the world trades. There is a distinct possibility that it may become cheaper to manufacture goods closer to the market place rather than in more distant lands - the future energy and food crisis's aside for the moment - the real question that needs to be asked and answered is how we in Wales can take advantage of this situation and reboot our manufacturing economy in a sustainable way?
Posted by Jonathan T Clark at Thursday, July 14, 2011