FEEDING OUR FUEL AND FOOD INSECURITIES


As UK householders brace themselves for increased energy bills, they are also going to take a hit from increased world food prices.  The UN's Food and Agricultural Organization (FAO)World food prices has revealed that world food prices rose 1.4% in September (in July food prices went up by 10%), driven up by higher meat, dairy and cereals prices. The rise follows two months of relative stability when food prices remained steady.

Here in the UK, we will end up paying higher prices for the food on the shelves. Elsewhere on the planet there are real concerns about possible food shortages as drought hit grain crops in the US Midwest, Brazil, Russia, Europe and central Asia. The UN has also forecast a decline in global cereal production this year.

The FAO is predicting that 2.286 billion tonnes of cereal are likely to be produced, this is slightly down from the 2.295 billion tonnes that had been estimated a month earlier. This forecast would mean a 2.6% fall in cereal production from 2011's yield, which was a record crop. This would result in a significant reduction in world cereal stocks by the end of 2013, yet there may be some light at the end of the tunnel as the early indicators for wheat crops in 2013 are said to be good.

The UN and the US Department of Agriculture says that  around one third of all food goes to waste and that consumers in rich countries waste almost as much food as the entire net food production of sub-Saharan Africa. To feed the worlds expanding population basically we will need to produce 70% more food by 2050 and this despite the fact that Global corn stocks (reserves) have basically halved since 1998.

More than 100 million more people across the world now suffer from hunger due to recent food price rises. Of all the humans on the planet, one in eight not have enough food. The situation is being made worse because we are turning food into fuel. The UN food agency (aback in August) called on the United States to suspend its production of biofuel ethanol. 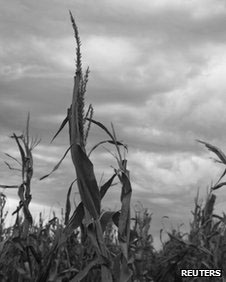 US law requires that 40% of the US corn harvest be used to make biofuel, the UN says that this quota could contribute to a food crisis around the world. The harsh drought and heatwave across the US has made the situation worse by destroying much of the country's corn crop, and driving up prices. The US is not alone in relentlessly chasing biofuel, many countries are increasingly exploring the possibility of growing some of their fuel rather than importing it.

The FAO's Food Price Index rose 3 points to 216 in September, but this is still below the record 238 reached back in February 2011. Cereal prices rose 1% from August, wheat and rice offset a decline in maize. Meat prices were up 2.1%. Dairy prices rose 7%, the sharpest monthly increase since January 2011.

Sugar prices fell 4.2%, reflecting an improved sugarcane harvest in Brazil, the world's largest sugar exporter. Oil prices fell by 0.4% in September and the International Energy Agency is predicting a fall in oil and gas prices. This no doubt explains why the energy companies are going to charge us more for our energy over the winter – or perhaps not!