It’s quite simple really; Russia wants to award the Medal of Ushakov to Britain's Arctic convoy veterans as a symbol of Russia’s gratitude to the naval and merchant navy veterans who ferried supplies to Murmansk and Archangel during the Second World War. The veterans risked their lives time and time again convoying crucial supplies through often atrocious weather and hostile seas to the hard pressed (then) Soviet Union, which was fighting for survival.

The Foreign Office (and the Ministry of Defence) has repeatedly (under both Labour and Conservative Governments) blocked this move saying that it would break the rules surrounding acceptance of medals. The Russian Embassy has expressed its 'deep regret' at this decision, which has understandably been condemned by surviving convoy veterans and their families. 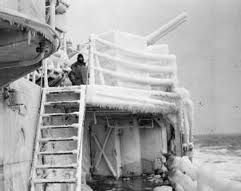 Between August 31, 1941 and May 22, 1945, some 78 Allied Arctic Convoy (more than 1,400 merchant ships escorted by ships of the British, U.S. and Canadian Navies) sailed to the ports of Murmansk and Arkhangelsk.  Some 85 merchant vessels and 16 Royal Navy warships were sunk by Nazi submarines and approximately 3,000 British servicemen were killed during the Arctic campaign.

The significance of lend-lease supplies for the Eastern front by Soviet-bound Arctic convoys and their role in defeating fascism is still emerging. The convoy veterans and the vital supplies they delivered were temporarily lost in the often hot rhetoric of the Cold War. Oleg Rzheshevsky, the Russian war historian, has noted that apart from everything else, the convoys were a powerful moral influence.

"The moral aspect of the Arctic Convoys meant a lot. This was an extremely important factor both for the army and for all our people as it signalled that we were not alone in that war but had strong allies such as Britain and the United States. This helped boost our troop morale on the battlefield and supported our people on the home front."

Many of the arctic convoy veterans are still with us, back in May 2010; surviving veterans were all awarded special medals by Russia in commemoration of the 65th anniversary of Victory over fascism. The awards ceremony took place aboard the historic Belfast cruiser, the last surviving UK warship that served the Arctic Convoys, a fresh reminder that World War II was not just a Soviet war, or a British war, but a common war against fascist tyranny. 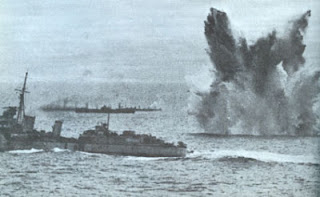 Prime Minister David Cameron, just like the rest  of them has broken his election promise to create a special medal for veterans of the Arctic Convoys. Successive Westminster governments have promised to create a medal, yet have failed to deliver on their promise. The Russian Government has awarded our veterans three medals, the arctic convoys are now part of Russia’s school curriculum. The Russian Government and the Russian people understand the convoy’s importance, yet successive UK Governments seem to really struggle with this.

I think it’s time for the National Assembly to explore ways we can honour our surviving arctic convoy veterans.  I believe that we need to do this quickly because it is the right thing to do and because I sat for many hours listening (as a small child) to heavily edited stories from my great uncle, a naval veteran of the Arctic convoys to Russia and of much else. Our veterans should not be left out in the cold again, the medal needs to be created and awarded to the veterans and their families before it is too late.
Posted by Jonathan T Clark at Wednesday, October 31, 2012