A report (produced by Arup - engineering consultants) on behalf of the Welsh Government has suggested that ditching the bridge tolls on the Severn Crossings could boost the economy of south Wales by £107 million. The report suggests that the removal of the tools could boost traffic flow by around an extra 11,000 vehicles driving over the two bridges every day. The Arup report says that businesses and consumers pay out around £ 80 million pounds a year to cross the Severn bridges.

The report looked at what would happen if the tolls were halved, increased by 50% or scrapped entirely. The total revenue brought in 2009 was £77.4 million pounds. A reduction in revenue if the toll was cut by around half (46%) could be around £36 million pounds a year (based on 2009 prices). An increase in the toll by around half (41%) would bring in an extra revenue of around another £36 million pounds per year. Either way any projected change in revenue (on paper) comes in is less than proportional to the change in toll because of either higher or lower traffic flows. 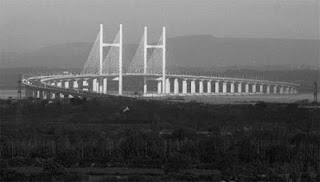 The tolls have been used to pay for their construction of the new bridge, and the maintenance and operation of both the old and the new bridge(s) via a concession agreement with Severn Crossings Plc.

The concession agreement currently in place ends at the point that the operator has raked in around £996 million pounds at 1989 prices (so we are talking about probably well over a cool £100 million pounds by 2018). The tolls are due to end in 2018 when the bridges will revert back to the UK Government.

Back in October (29012) the UK transport minister Stephen Hammond revealed that the government has substantial debts on the bridges which would to be repaid so the tolls would not cease to be collected.  Currently both the Severn Bridges are run by a private company, the concession agreement is due to run its course in 2018, at which point the bridges will return to government ownership. It had been suggested that once that concession agreement ran out, the bridge tolls might have dropped to around £1.50.

This, however, now appears not to be the case, the House of Commons Welsh Affairs Select Committee, was told that there would be no drop bridge tolls when the concession ends. Even though the bridges would come back into public ownership there were apparently "substantial government debts that needs to be repaid" from building and maintaining the river crossings amounting to around several hundred million pounds.

The Welsh Affairs Select Committee was told that the government has a deficit of at least £112 million left on the bridges covering items such as maintenance costs and the costs of "professional advice". The Department for Transport has stated that once the concessions ends the government will need to repay its own debts resulting from the building and maintenance of the bridges, and so tolls will continue after 2018.

Meanwhile the Labour in Wales First Minister Carwyn Jones has stated that control of the bridges should be transferred from the UK government to the Welsh government in 2018, he has so far refused to state say what a Welsh Government would do to the tolls. The Severn Crossings which are the main way in and out of South Wales carry an average daily traffic of about 80,000 vehicles. Bridge Tolls have been in place ever since the first Severn Bridge was constructed.

So there appears to be little chance that hard pressed commuters will see and end in sight to the tolls, whether they remain under the control of the Department of Transport (in London) or the Welsh Government (in Cardiff) – no doubt both potential inheritors of the tolls don’t want this cash cow to be put out to pasture.  So whether it looks like it will be one of our governments continuing to fleece us  and continue to the ramp up fat profits at our expense for the foreseeable future (after 2018). Thanks for nothing...
Posted by Jonathan T Clark at Tuesday, November 06, 2012