Sadly it won't come as much of a surprise to even the most impartial observers that UK Government's have a tendency to treat former (and serving) service personnel badly. On occasion you may well be driven to wonder if anything has changed since 1918; once again our service personnel are serving in a distant land and their families live quietly at home in sub-standard accommodation.

Back in 1918 the solders that served through the First World War (some of my relatives amongst them) were promised 'Homes fit for heroes'. Oddly enough the last but one Conservative / Liberal Coalition found that honouring promises to live heroes cost too much (what price the sacrifice made at the front?) once the war was over it turned out that dead heroes were cheaper to honour than live ones - thus fell the Geddes Axe.

In the last one hundred years the only honourable exception to this roll of shame was the 1945 Labour Government which made significant efforts to help the veterans with access to education, jobs and decent housing, The other post war governments have quietly and consistently betrayed the military covenant and any promises to our service personnel (and former service personnel) have not been honoured.

Last week we observed another Remembrance Sunday, this one some 94 years after 1918 and we have a UK Westminster Government that is not honouring the military covenant. In 2012 we still find ourselves in a situation where soldiers families are living in sub-standard accommodation and our veterans get shoddy treatment for services rendered after completion of their service. 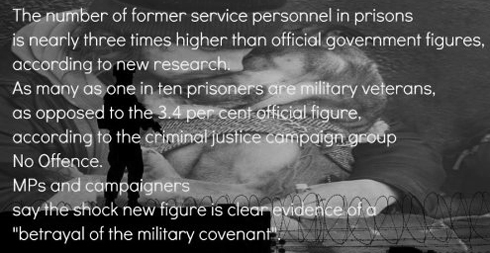 Last week Plaid Cymru MP Elfyn Llwyd used a Parliamentary debate to stress the importance of the Military Covenant, expressing concern that it is not being enforced as robustly as possible in all areas. He warned that many veterans face isolation and suffering as a result.

Mr Llwyd, who has campaigned extensively for veterans' rights and chairs the Veterans in the Criminal Justice System Parliamentary Group fears that a postcode lottery is at work in which some veterans requiring post-service support are discriminated against purely as a result of where they live or how long ago they served.

He added that, although the majority of armed forces personnel adjust to civilian life normally after discharge, it is vital that those who do require care receive the utmost support in accordance with the Military Covenant, highlighting its importance as something which must be put into practice rather than merely exist in principle.

"While it is hugely encouraging that the Covenant has now been enshrined in law, it is vital that it forms the basis of robust action, rather than merely empty words.

"If this is not achieved - as I fear is happening in some cases at present - there is a real danger that some veterans face discrimination as a result of where they live or how long ago they served. This postcode lottery is wholly unacceptable and does a great disservice to those who have sacrificed so much for their countries.

"While the majority of armed forces personnel adjust to civilian life after discharge, unless the Covenant is practiced properly then those veterans who do need help face a whole range of problems such as isolation, lack of welfare support, mental health issues and in some cases, alcohol problems.

"The mere fact that a debate was held on this topic today clearly indicates that concerns exist over the Military Covenant's shortcomings.

"What we need is more resources to deal with mental health problems, greater recognition of the welfare needs of veterans, and urgent action to address the dependency on alcohol and other substances which many armed forces personnel develop.
"These individuals have shown great commitment and sacrifice throughout their time in service and while recent years have seen positive developments in the field of veteran care, much more must be done in order to prevent more men and women falling into a downward spiral of suffering."
Posted by Jonathan T Clark at Saturday, November 24, 2012