Imprisoned Iranian human rights lawyer Nasrin Sotoudeh, who has reportedly been on hunger strike for more than a month, appears determined to continue the act of protest indefinitely.

The lawyer's husband, Reza Khandan, has written on his Facebook page that Sotoudeh told him on November 20 that she was on an "unlimited" hunger strike.

"I asked her, 'How long will you continue your hunger strike?'" he wrote. "She said: 'The hunger strike is unlimited. You know what 'unlimited' means?'"

Khandan said he was allowed to meet Sotoudeh a day after she was transferred from solitary confinement to the general ward of Section 209 in Tehran's notorious Evin prison. He said that his wife's weight had dropped to 43 kilograms.

When he is allowed by the authorities to visit, Khandan has informed the public about the conditions of his jailed wife via Facebook, which has in recent years become a platform for news that is censored or ignored by the state-controlled media. 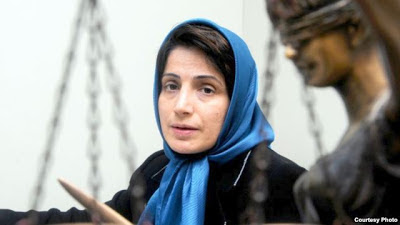 Sotoudeh, who was awarded the European Parliament's Sakharov Prize for Freedom of Thought this year, defended political activists, opposition members, and juvenile offenders on death row before she was jailed in September 2010.

She was sentenced to six years in prison and banned from working as a lawyer for 10 years on charges that include acting against Iran's national security and spreading propaganda against the Islamic regime.

Sotoudeh's courage and outspokenness have earned her the respect of many inside and outside of Iran and turned her into a symbol of resistance against the establishment.

A mother of two, Sotoudeh reportedly stopped eating in mid-October after prison authorities prevented her relatives from visiting her. Her husband and 12-year-old daughter have also been barred from leaving Iran.

"I can't sit here and do nothing and let them do whatever they want with my child and family," Sotoudeh was quoted by her husband as saying in their prison meeting this week.

An October 24th editorial in "The Guardian" compared Sotoudeh to Burmese pro-democracy icon Aung San Suu Kyi, who was also once separated from her children.

Iranians wanting to express solidarity with Sotoudeh, whose first name means "jonquil"  in Persian, have posted images of that white flower on their social-media profiles in recent weeks.