A TROJAN HORSE OF A TREATY! 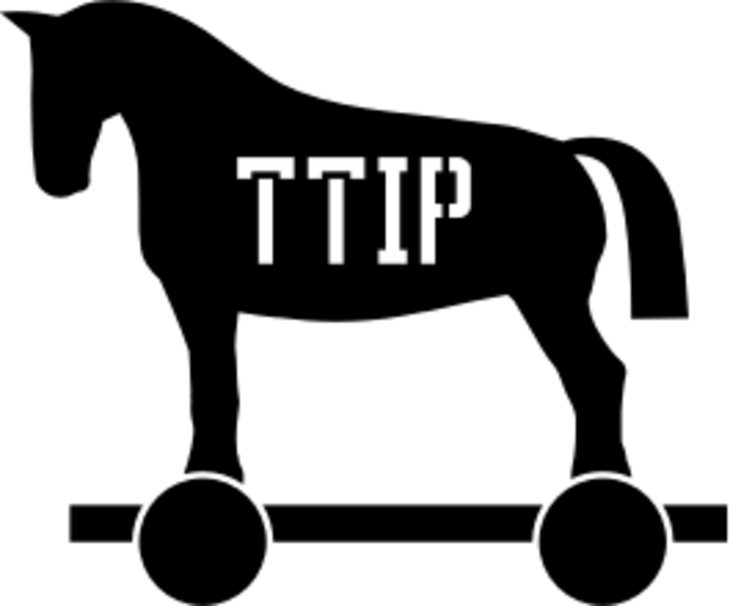 TTIP (Transatlantic Trade and Investment Partnership) the impending US-EU trade agreement marks the merging of the EU's common market with that of the United States, but without any of the built in social and political safeguards, which are at least nominally supposed to exist within in the EU.

The agreement is highly controversial, the TTIP agreement risks opening up more areas of public services (including within the NHS) to private competition (something which suits the privatisation agenda of most of the Westminster based political parties), particularly those services where there is already non-government provision such as with social care.
The reality is that a strong and very productive trading relationship already exists between the EU and US. What the TTIP agreement as it is proposed will do, is give corporations unprecedented power over our public services and seriously threaten democratic decisions in the pursuit of company profit.
By discussing these issues in secret, negotiators from both sides are doing deals behind closed doors, which do not have public support and will remain largely un-discussed and un-scrutinised. We need a full honest and open debate about what TTIP should include, based on what is best for people, not multi-national companies and American trade and our own Welsh government should be standing up for our national interests.
After the financial crisis of 2007/08 and the resultant bail out of the private sector it might have been hoped that the pendulum might have swung in favour of democracy to rebalance flawed corporate power. That said, it is apparent that the Westminster based political parties don’t think so hence their relative silence on the implications of TTIP on our public services.
We need a much more democratic economy, driven and shaped by the needs of the people it serves. The TTIP agreement threatens this basic principle and as is should be rejected. The complete lack of transparency is disturbing particularly as much of the negotiation have ominously been conducted behind closed doors and little has been divulged in terms of the exact content and the level of the risk to our public services.

In its current form TTIP means that Europe will be subject to American-style 'light touch' regulation for corporate take-overs and practices. It threatens to open up our public services to the possibility of aggressive private take-overs. More disturbingly the profits of corporations will be 'future proofed’ so that any changes to laws or regulations by democratically elected governments will be open to corporate challenge.


As if bailing the banks out with public money was not bad enough, this means that all of us tax-payers may end up having to pay to make up for the potential loss of projected corporate profits. That loss of democratic accountability over our public services may well also mean that future decisions will not be subject to review by our own judiciary, but instead referred to private, corporate, closed-door courts.

Plaid believes that public services should be in public hands and that markets should be democratically accountable for their decisions and continues to oppose this latest attempt to sell-off and sell-out our future. We need to ensure that our public services are protected from being plundered for profit by multi-nationals companies and that they remain democratically accountable.
Posted by Jonathan T Clark at Wednesday, March 04, 2015