IT’S NEVER TO LATE TO MAKE THE RIGHT DECISION!

It would have been nice if the Labour in Wales Government in Cardiff Bay had shown some common sense and ruled out its plan for a new M4 to the south of Newport (the so-called “Black Route”) on environmental and value for money. The Welsh Government should have chosen instead to invest in a high-quality upgrade of the existing A48 corridor; the so-called “Blue Route” which would come in at around £380 million pounds as opposed to the estimated £1 –£ 1.2 billion pounds cost of the “Black Route” – had this happened then the judicial review into the flawed decision would not be taking place. 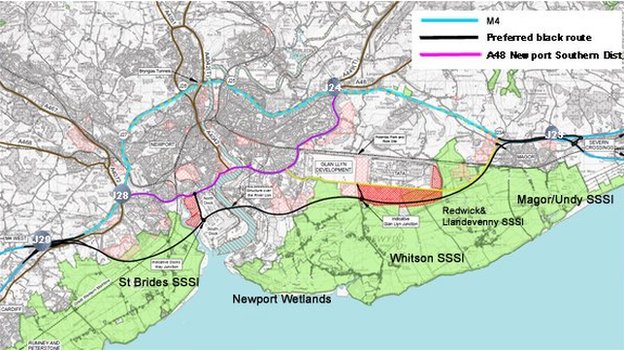 The “Blue Route” provided a real cheaper innovative solution to the problem of the M4 and would have meant that more money would be available for transport investment across the rest of our country. We can keep our economy in the south moving by investing in the “Blue Route” proposals around Newport. This would be a significant boost to the economy around the city, and would have provided traffic with an alternative route for those times when the M4 becomes too congested.

Both the Federation of Small Businesses and the Institute of Directors supported this proposal and it would certainly be a much quicker and more decisive way of dealing with the congestion than building a new M4 (which would not open until 2031). The choice of the ‘Blue Route’ would have delivered a high-quality proposal, which would have boosted Newport’s infrastructure at a much lower cost and potentially could be completed by 2018.

Now I have long believed that when spending public money, it is essential that it is worked exceptionally hard, with every single pound’s impact being maximized. The proposed M4 Relief Road (the “Black Route”) remains poor value for public money as there are easier and cheaper more deliverable alternatives (‘The Blue Route’) to the proposed M4 Relief road. We have long needed to upgrade the A48, SDR and the Queensway across the Llanwern site and we badly need more investment in our railways including electrification of the valley lines and the proposed metro light rail system (less the guided bus way elements).

The “Blue Route” could solve the congestion issue on the M4 by 2018 and provide more than adequate relief of traffic congestion over the period to 2035. The UK Government’s forecasts have shown a 20 per cent growth in traffic flow between 2012 and 2030, the Blue Route would satisfy capacity requirements to 2025. Incidentally the forecast for projected traffic growth in the Welsh Government’s consultation document has already been shown to be in excess of actual flows for 2012 and 2013.

Another real and lasting benefit from choosing the “Blue Route” is that it would protect the highly sensitive environmental sites on the Gwent Levels. While it’s hard to put a financial cost on saving the Gwent Levels, the Blue Route option would save almost £620 million pounds, which could then be reinvested in projects elsewhere in Wales. Even now it is not too late for the Labour in Wales Government to change its mind and take an opportunity to reconsider its plans to borrow and the resultant commitment to spending £1 - £1.2 billion pounds + on a 14 kilometre stretch of motorway – something which just does not add up.
Posted by Jonathan T Clark at Tuesday, March 10, 2015