It is long past time to separate the word ‘domestic’ from ‘violence’ - what is simply violence and to change the way offenders are dealt with. Historically our Police Services have had a poor (if not indifferent) record when it came to dealing with domestic violence, with offences of violence in a domestic context being effectively written off. 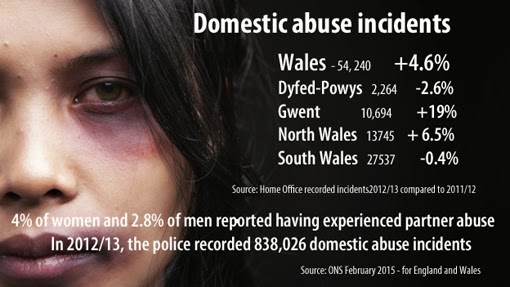 Violence Against Women is a violation of human rights and a form of discrimination against women. It covers a wide range of coercive and abusive elements, such as rape and sexual violence, domestic abuse, forced marriage, female genital mutilation, so called 'honour' crimes, trafficking and sexual harassment.

The current level of violence against women in Wales is unacceptable:


Reform of the law in relation to domestic violence has been a slow process, there has been some progress but the grim statistics in relation to domestic violence continue to be rolled out. The Violence against Women, Domestic Abuse and Sexual Violence (Wales) Bill faces an uncertain future in the National Assembly, The Bill was intended to ensure a focus across the public sector on the prevention of these issues, the protection of victims and the support for those affected by such issues.


The Bill contains provision for the appointment of a Ministerial Adviser. The failure to make schools duty-bound to teach healthy relationships and respect, something which had been "universally welcomed" when it first proposed, has seriously weakened the Bill and disappointed domestic violence campaigners who are continuing to work to persuade the Welsh Government to strengthen the Bill.
Posted by Jonathan T Clark at Sunday, March 01, 2015