THE BIG BUG OUT?

Some minds are understandably focused on the Afghan exit strategy and how to get out while keeping NATO casualties to a minimum. Now I don’t for a moment question the courage and endurance of our service personnel who have been sent by the politicians in Westminster to complete a near impossible task.

I remain however critical of what followed, when collective eyes were taken off the ball and Afghanistan was effectively placed on the back burner out of sight and out of mind for a dubiously motivated and justified invasion of Iraq. I also deeply question the wobbly logic that ran riot and the mission creep that developed in relation to Afghanistan during the latter years of the Blair and Brown governments, after attention shifted back from Iraq.

The Con Dem government is largely blameless inheriting the ongoing car accident of Afghanistan from its predecessor formerly New Labour government, who should take the full measure of blame for the unfolding mess. However things are spun, the reality is that things are not going well, it has been revealed (in a UN report) that three times as much opium was produced in Helmand last year than was being produced when British troops first moved in 2006.

A report by the UN's Office on Drugs and Crime (UNODC) forecasts an increase in opium production this year and says this has been partly caused by the lack of agricultural assistance. The report blames the situation on insecurity. As the pullout progresses and international troops wind down their combat role, the increase in poppy cultivation is a significant failure for the international project, and particularly the UK's role in it.

Most of the worldwide production of illegal heroin, the drug refined from opium, comes from Afghanistan, and the then Prime Minister Tony Blair cited this as a reason for the war in 2001, calling the drugs trade a part of the Taliban regime that "we should seek to destroy". Back in 2001, the Brits (and the USA) made a deal with the surviving Taliban to reduce opium production by 94%.

Just before the invasion Taliban actually brought in a ban on poppy growing, declaring it to be anti-Islam, which lowered the overall production. After the invasion, rightly or wrongly as result of Blair’s decision the UK took a lead role in counter-narcotics from the beginning, and sent troops to Helmand in 2006 partly because this was the largest area of poppy cultivation.  The UK (back in 2002) became the lead nation for counter narcotic activities in Afghanistan. British cash for a voluntary eradication programme which was run in 2002 produced what has been described independently as “a total failure.”

Ironically Opium production has actually become more important to Afghanistan’s economy since US and NATO forces invaded back in October 2001. After an initial drop in opium production caused by NATO’s invasion, opium production resumed and now the country produces some 90 per cent of the world’s opium, the great bulk of which now ends up on the streets of Europe and Russia.

Now the UN report predicts that this year more than 75,000 hectares of land in Helmand is under cultivation for opium poppies, three times as much as in 2006 - and this is expected to increase. In Afghanistan any counter narcotics activities are merely an unavoidable occupational hazard because there is no viable alternative industry which can create the 50% of licit GDP that opium trading represents.

Opium, which is the basic raw material for heroin, and most of the illegal drugs that are on sale on the UK's streets come from Afghanistan. Afghanistan’s Government and business leaders operate in a wildly unregulated free market economy, where opium offers the safest and most profitable investment available to both peasant farmers and Narco-entrepreneurs.

The World Bank recognises that the narcotics trade accounts for 1/3 of all economic activity and acts as a major source of demand for services, goods and construction. The trade also provides income and livelihoods for a large number of people generates almost half a billion dollars a year for farmers.  Perversely the drugs trade goes on giving by providing several hundred million dollars in income for labourers and supports the country’s ramshackle rural economy.

The bank also acknowledges that the trade actually supports the Afghan balance of payments to the point that it produce a net surplus, not to mention supports the Afghan currency. Additionally as a result of imports from drug proceeds actually generates significant amounts of customs revenue (Source: The Fulcrum Strategy (Version 3) By David James, July 2006).

The problem is that the drug trade destabilises Afghanistan, and the chronic corruption and the effects of the ongoing insurgency combine to actively undermine the country’s tax base.  Security aside a stable tax base is one of the key requirements if the Afghan Government, post pull-out, is going to be able to sustain a potentially prolonged campaign against the Taliban.

Any Government that is pretty much dependent on foreign aid in lieu of a revenue stream is in trouble that might work out over the short-term but will not last over the longer term. What may in the end lead to the plug being pulled and foreign aid drying up is that much of the international aid to Afghanistan ends up being stolen before it ever gets to its intended recipients.

The problem for the rest of us is that the opium based drug trade’s impact spreads far beyond the porous boundaries of Afghanistan. Back in March, Viktor Ivanov, the head of Russia’s Federal Drug Control Service, made a presentation to UN’s 56th session of the Commission on Narcotic Drugs in Vienna, stating that, opium growth has increased by 18 per cent from 131,000 hectares to 154,000 and that “Afghan heroin has killed more than 1 million people worldwide since the ‘Operation Enduring Freedom’ began and over a trillion dollars has been invested into transnational organized crime from drug sales”. 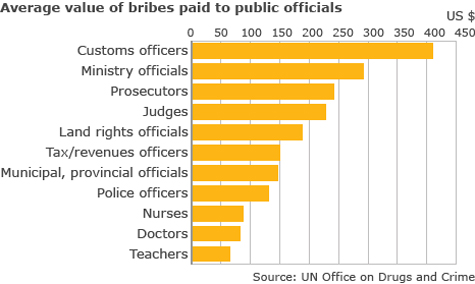 Transparency International in its 2012 Corruption Index (CPI) ranked Afghanistan as one of the (joint) most corrupt country with North Korea and Somalia. President Hamid Karzai in the United State for the NATO Summit in Chicago (in 2012) was asked by CNN’s Wolf Blitzer about this rampant corruption issue in Afghanistan. As usual, President Karzai’s answer was “it is the contractual mechanism that the US applies in Afghanistan” that encourages bribery, fraud, and corruption.

The Afghan President has consistently blamed the west for the loss of billions of aid dollars and the rise of corruption in Afghanistan. The harsh reality is less simple as on a daily basis, ordinary Afghans are less concerned about the kinds of bribery that occurs when the US and Western  development agencies hand out big development contracts. Ordinary Afghans are more infuriated by the kinds of bribes that they often have to give to get what they are legally entitled to via “harassment bribes.”

Basically harassment bribes are like when a retired Afghan has to pay some cash to the pension officer to receive his retirement check. Or, when a young man or woman freshly graduated from college has to get his or her paperwork done in order to become a teacher. To accomplish this any prospective teacher will be asked to fork out a hefty bribe. Or your Tazkira or national ID card is held up until you pay some cash to the officer in charge. These are all simple illustration of harassment bribes.
Harassment bribery is widespread in Afghanistan, and it plays a large role in breeding inefficiency and has a profoundly destructive effect on civil society. While President Karzai consistently wags the finger at the West for widespread corruption in Afghanistan, yet his administration has failed to take responsibility for banishing bribery on the lower level. The West has for a quiet life has looked the other way as local low level corruption tends to be written off as a fact of life something that indirectly may feed support for the Taliban.

Overwhelmed by both large and small scale corruption what can an effectively endemically corrupt Afghan government seriously do to discourage bribe givers and takers (at all levels of government) even if it wanted to? Endemic corruption aside the security situation is the key, with NATO leaving and the Taliban waiting in the wings even a diehard optimist would struggle not to think that things don’t look good.

Behind the NATO pullout lurks the unspoken question of how can a successful NATO withdrawal ensure that the corrupt Karzai Government retains its hold on power. And at least in the short term can they (the Afghan Government) keep the Taliban at arm’s length and can the whole sorry process be made to look good for domestic political consumption at home.
Posted by Jonathan T Clark at Friday, April 26, 2013